Chicago's North Shore is located in the Midwest of the United States, serviced by three airports and easily accessible from…anywhere!  Convenient and centrally located for drive in visits also. Travel here and within our area by train, bus or car. See a full list of our transportation companies here. 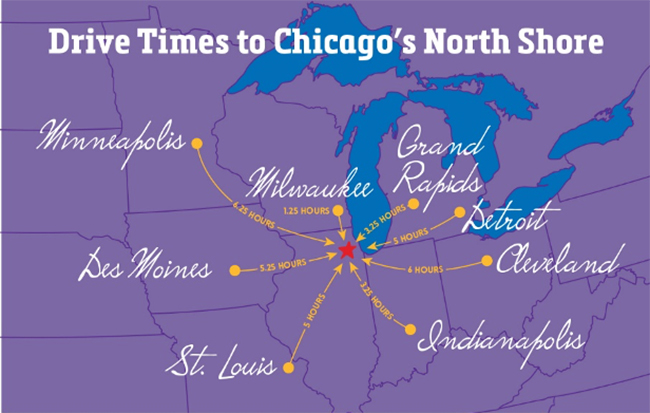 O’Hare International Airport - One of the world’s largest airports connecting to Chicago to the world.  20-30 minutes away from North Shore communities.

Midway International Airport - Midway Airport is located on the south side of Chicago and is approximately one hour from most North Shore communities.

Getting here – by Train

800-USA-RAIL Amtrak provides intercity passenger rail services to more than 500 destinations in 46 states on a 222,000 mile route system. Chicago’s North Shore is serviced by Amtrak at the Glenview station by The Hiawatha service between Chicago and Milwaukee. Seven trains run daily between these two city centers stopping in Glenview. The station is a close ride to many North Shore hotels and attractions.

Getting Around Metro Chicago – by Train and Bus

Evanston and Wilmette
The Purple Line has direct access to downtown Chicago in a little more than a half hour via the express rush hour trains (5:30–9:30 a.m. & 2:45–6:30 p.m.) weekdays. All other times during the day and on weekends and holidays, the Purple Line runs to Howard Street where it meets the Red Line with continuing service to Wrigley Field, Lincoln Park, downtown Chicago including the Magnificent Mile, The Loop, Millennium Park and Grant Park), Chinatown and Guaranteed Rate Field. During non-rush hour times the ride is approximately 40 minutes.

Skokie
The Yellow Line services Skokie and operates weekdays 5:00 a.m.–10:00 p.m. The Yellow Line can be accessed from downtown Chicago by taking the Red Line until its end at Howard Street and transferring to the Yellow Line. The ride on the Yellow Line is only 8 minutes in length and has two stops: Oakton Street in Downtown Skokie and the last stop at Dempster Street. Chicago is accessible in a little more than 40 minutes. Pace buses are available at the Howard (where Purple, Red and Yellow lines meet) and Skokie stations to hundreds of specific destinations on the North Shore.

Metra is the premier suburban commuter rail system serving northeast Illinois. With 241 stations in the six-county area of northeast Illinois, Metra makes traveling to and from downtown Chicago and its surrounding areas easy and convenient. The following North Shore communities are serviced by Metra:

Evanston, Wilmette, Winnetka, Glencoe
Evanston Wilmette and Winnetka are serviced by Metra’s Union Pacific North Line which leaves/arrives at downtown Chicago’s Ogilvie Transportation Center (Madison and Canal Streets in the Loop) and leaves/arrives in the heart of both downtown Evanston (Davis Street) and two other Evanston stops, one station in Wilmette, three stations in Winnetka and two stops in Glenview. Trains run daily and the ride is a half hour. During the week, service runs at least every half hour; more frequent during rush hours. During the weekend, service is available at least hourly.

Glenview & Northbrook
Glenview and Northbrook are served by the Milwaukee District North Line which leaves/arrives at downtown Chicago’s Union Station (Canal St. between Adams and Jackson Blvd in the Loop). Trains run daily with service every half hour weekday during rush hours, hourly during non-rush hours weekdays and service every two hours during the weekend. The ride is 45 minutes. There are two stops in each community.

Prospect Heights & Wheeling
Prospect Heights & Wheeling are served by the North Central Service which leaves/arrives at downtown Chicago’s Union Station (Canal St. between Adams and Jackson Blvd in the Loop). Trains run daily with service every half hour weekday during rush hours, hourly during non-rush hours weekdays and service every two hours during the weekend. The ride is 45 minutes.

Providing bus transportation from all suburban city and suburban train stations, city and village centers as well as main attractions including O’Hare International Airport. Their website provides bus schedules and routes from your starting point to your chosen destination.